Over the years, Quentin Tarantino has established himself as a director and screenwriter with a focus on dialogue. His talent for writing razor-sharp, entertaining and witty lines has made him one of the biggest influences on the contemporary cinematic landscape and has won him two Academy Awards for Best Original Screenplay (for Pulp Fiction, 1994, and Django Unchained, 2012).

But Tarantino's latest film, The Hateful Eight (2015), is arguably his most dialogue-centric work to date, employing minimal locations wherein the tight spaces allow the audience to focus on character development, suspense and narrative structure. While Tarantino is known as a movie fanatic and talented cinematic stylist, this mystery-western's emphasis on words over action could make for an intriguing work in another medium: theatre.

The Hateful Eight is set in Wyoming nearly a decade after the American Civil War, as a wintry blizzard is approaching. We are introduced to a bounty hunter, Major Marquis Warren (Samuel L. Jackson), who is transporting his charges to the town of Red Rock. Caught in straining circumstances, he snags a ride from fellow bounty hunter John "The Hangman" Ruth (Kurt Russell), who has a live bounty of his own — Daisy Domergue (Jennifer Jason Leigh) — and is traveling with Chris Mannix (Walton Goggins), the self-proclaimed Sheriff of Red Rock. On their journey to Red Rock, the group takes shelter in a stagecoach lodge called Minnie’s Haberdashery where they encounter lodgers — Oswaldo Mobray (Tim Roth), Joe Gage (Michael Madsen), Sandford Smithers (Bruce Dern) and Bob (Demián Bichir). As the clan is confined within Minnie’s Haberdashery, tensions arise and secrets are revealed. The film is essentially a Westernized version of Tarantino's stagey debut feature Reservoir Dogs (1992) and includes several elements that could be utilized as part of a theatrical adaptation.

Kurt Russel and Samuel L. Jackson in The Hateful Eight (2015)

Despite its long running time of approximately three hours, The Hateful Eight takes place almost in real time. In fact, the action lasts barely a whole day. This combination of a long running time and limited time jumps within the narrative resembles the temporality of a play more than a typical film. The Hateful Eight has an organized sense of continuity wherein characters develop, difficult situations arise and dire consequences follow soon after. The film does not need to stretch over the course of many days, weeks, months or even years because its main emphasis is on situation, much as many stage plays explore the interactions and intersections of an ensemble cast all present at once or in close temporal proximity.

In addition, most of the film is confined to a minimum number of locations, in the way that stage plays feature extended scenes within a limited number of discrete locations. The film takes place in the American wilderness where a dangerous blizzard is on its way. The exterior locations of the snowy woods in Wyoming would be perfectly adaptable for the stage with the help of sets and tricks of stagecraft like soundscapes and lighting to create a wintry atmosphere. It is also possible that the stagecoach, which we see in the first two chapters, could be crafted for the stage as part of the set; the isolation of a set piece within space and the use of light could even create a theatrical equivalent of the closeups used in the film.

Of course, the most significant location of The Hateful Eight is Minnie’s Haberdashery, a passing lodge where the eight strangers all take refuge. The location is an example of highly detailed production design, featuring numerous set pieces and props, including armchairs, a fireplace, tables, chairs and beds, as well as props that are crucial to the narrative, such as guns, the bowls of soup and the kettle. Much like the film's dialogue and abundance of characters, the detailed set designs and props are already highly theatrical.

An old-fashioned trademark of Quentin Tarantino’s work is his choice to structure the narrative into chapters, usually announced in bold on-screen text. Tarantino first made the technique famous in Pulp Fiction, but he continued to employ this touch in Kill Bill: Vol 1 (2003), Kill Bill: Vol 2 (2004), Inglourious Basterds (2009), Django Unchained  and now The Hateful Eight. Each of the film's intervals begin where the previous one left off and generates its own little story while building further toward the finale. While this "chapter" structure is unusual in cinema, which generally emphasizes the smooth, uninterrupted flow of plot, it recalls the theatrical act structure. In fact, The Hateful Eight even goes so far as to adopt the theatrical tradition of the intermission in the film's 70mm roadshow screenings. 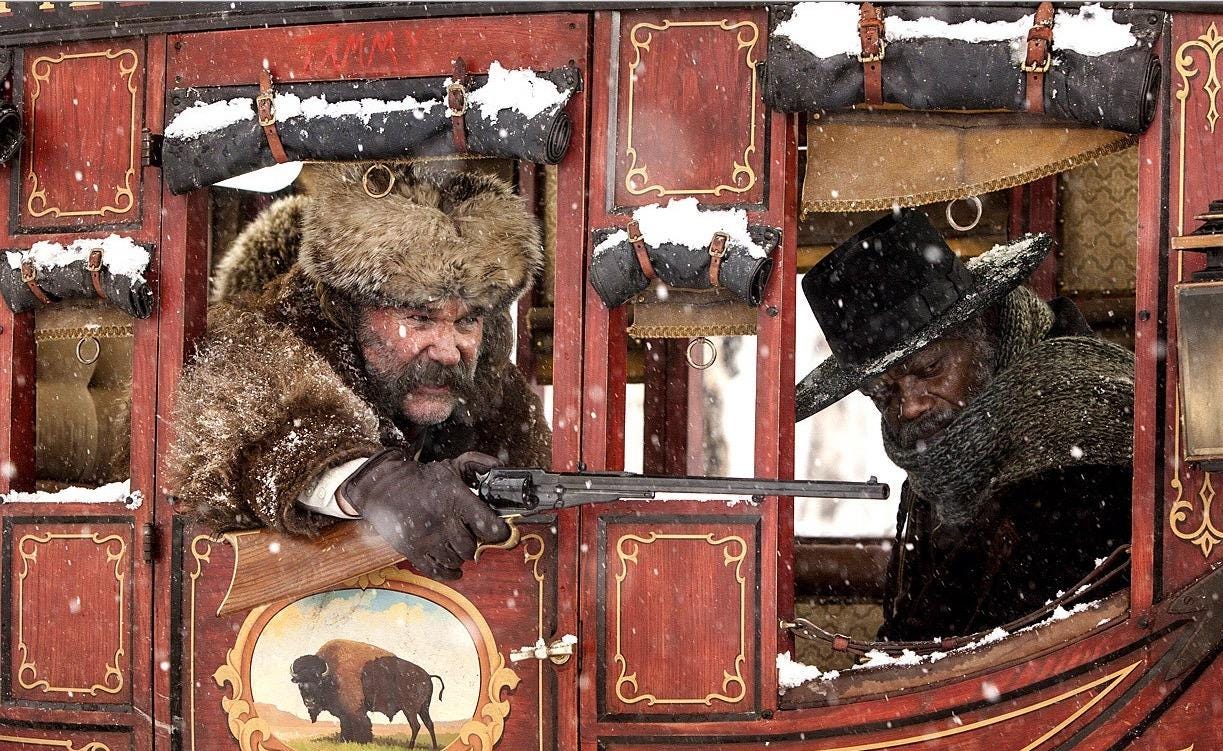 The stagecoach in The Hateful Eight (2015)

The theatrically inspired elements of The Hateful Eight are not mere coincidence; Tarantino himself has even acknowledged the possibility of adaptation. Speaking to The Wrap, the director said, "I’ve thought it out completely. I’m just waiting for this awards season to be over so I can write it." While he did address some disadvantages (he insisted that "the mystery aspect will only really work in the movie"), the film's fundamental nature is undeniably theatrical.